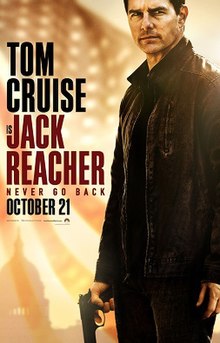 Jack Reacher: Never Go Back has an extremely thin plot, but the action and the surprising wittiness makes it watchable, but definitely not memorable!!!

I have said a lot of things here and there about Tom Cruise in my past blogs. He is definitely an iconic actor known for many iconic roles. With that said, Jack Reacher is definitely not memorable. I remember the first movie and don’t get me wrong, it is a good movie, but after a while I kind of forgot about it. When I heard the sequel for this film, I literally had to go back and remind myself how the film went. It is certainly not Tom Cruise’s fault. It is the writing and lack of memorable action scenes that made it forgettable. It is practically the same for its sequel which is not surprising.

What I Like: The action is what made this movie watchable. It had some good old fight scenes and car chases that made it fun to watch. Tom Cruise as Jack Reacher is a cool character, but I don’t understand why he is a bum now. He is a good thinker, and exposes the bad guys in a cool way. His intimidation is funny yet cool. Speaking of funny, this film is surprisingly witty. Jack Reacher had some funny one liners and was sarcastic with the higher ups in the military trying to arrest him. It also brought some comedic life making fun of the military detectives which really lightened the mood.

The So So: The story is very thin. Unlike the first movie, it wasn’t as clever. It can be cliché for a political action movie. What I do give it credit for is the pacing of the story which didn’t make it boring whatsoever. It really didn’t have any slow parts, it went straight to the point, and delivered what we want to see, which is Tom Cruise kicking butt.

What I Didn’t Like: As good the pacing was, the story is a complete letdown. It starts with Reacher going to Washington DC to meet Major Susan Turner, played by Cobie Smulders who by phone Reacher helps her get bad guys. That turned into some kind of romantic relationship, but she is framed and Reacher decides to get to the bottom of it. It gets worse when he supposedly has a daughter which leads to an awkward relationship, especially since it ends up that Reacher is not the father. (Sounds like an episode of Maury) Also you hear bones cracking in the fight scenes, but guys still standing up. The whole story turned out that Major Turner is the scapegoat for a cover up involving drugs and black market weapons. It is like the clichés from a cop movie and a political thriller came together and had a cliché baby called Jack Reacher: Never Go Back. (I really hate that title.) The villains weren’t even memorable, just typical. In the end, the first movie was good but not memorable, and this one is definitely forgettable.

Overall: If you’re into a good old action movie, it is worth a watch. If you’re looking for more, don’t even bother. To me, the Jack Reacher movies are forgettable, and I hope Tom Cruise moves on and either makes another Mission Impossible movie, or something Oscar worthy!!!

(Sidenote: A Perfect Match- It is a black romantic comedy that did provide some laughs. However, when it comes to black romantic comedies, it is very clichéd with almost everything. The only thing that was missing was Morris Chestnut in this film. Also, the acting was very subpar for its main characters. Then again, what do you expect when the titular characters are played by entertainers Terrence J and Cassie? At least it is not as bad as the Madea movies!!!
Rating: 2.5 Stars)