Hacksaw Ridge is a great war movie with a good story to back up the action, it’s director Mel Gibson at his finest!!!

I could talk about Mel Gibson and his awesome movies and racism, but I rather go on a personal approach for this blog. I am a Seventh-day Adventist (SDA) and it seems it is one of the Christian denominations that nobody really knows about. Lately, we have been getting some buzz in shows like Family Guy, politics with Dr. Ben Carson (unfortunately) and now in a movie about a famous war hero Desmond Doss, and his heroics on the battlefield without touching a gun. I always was intrigued by his story, because I don’t believe in using guns, even for war. Just the thought of taking someone’s life is crazy for me. However, he worked with his fellow soldiers in war but instead of killing lives, he saved lives. His bravery earned him a Medal of Honor. I loved that he stood for his morals and values as an SDA, and still become a national hero. It also gives us, SDAs, a good look on what we are all about. Especially since it is directed by Mel Gibson and starred Andrew Garfield, I knew this movie would be a unique war epic.

What I Like: Let me start off by saying that the war action scenes are some of the best I’ve seen since Saving Private Ryan. Director Mel Gibson has choreographed some epic battle scenes that were thrilling with a lot of violence and gore to go around. I hadn’t been this shocked about the violence since Saving Private Ryan which to me, and still is, one of the best war movies ever made. With that said, some of the more thrilling scenes were when soldier Desmond Doss, played by Andrew Garfield, was working overtime risking his life going around the battlefield saving wounded soldiers lives. Every time when the Japanese come close, you feel tension even though you know what is going to happen. In one scene he buries a fellow wounded soldier because the enemy was close, and Doss himself hid under a dead body. When the Japanese soldiers walked all around that area spearing the dead soldiers’ bodies and almost cutting Doss, I was at the edge of my seat. What made this film even better is that it had a really good story to back it up. You see a guy who wanted to serve without taking a life, and had to go through many trials and tribulations to be a good soldier without breaking his values. You see Doss show a lot of resilience in boot camp and in battle, and it made a great story that makes this war movie very unique and enjoyable. The acting was also really good. Garfield as Doss played the role very well, and gave the character Doss the respect he deserved. Probably one of the great lines this year as he is saving wounded soldiers, he always prayed to God saying, “Please Lord, help me find one more.” That line spoke volumes in his dedication as a soldier trying to save lives, even the enemies’ lives which demonstrated his true character. I also enjoyed seeing Vince Vaughn’s character as Sergeant Howell. When he was training his soldiers at boot camp he was hilarious with his drill sergeant. Almost as funny as the opening scenes of Full Metal Jacket. As the movie progressed, his dramatic acting was pretty good as a soldier. I’m glad he did well in his role, because he hasn’t been doing too well lately.

The So So: Since Doss is from the same denomination and has the same beliefs as myself, I kind of find it disappointing they really didn’t describe his beliefs and spirituality in great detail. I thought that would add more to his character development and really show his faith in action. They did mention it here and there, but not enough in my opinion. Not to say his character wasn’t developed well, because it was, but I just thought it was a semi missed opportunity to really show his strong faith as an SDA.

What I Didn’t Like: Granted it is a true story, and from my research nothing really was invented for the story of the movie. However, I knew that one soldier he trained with and actually becomes friends with, (with the whole fellow soldier being and jerk and then a friend cliché), would end up dead. That is exactly what happened, and I knew the character Smitty, played by Luke Bracey would be the one. The chemistry was too good, and his death was clearly foreshadowed.

Overall: With a couple little gripes here and there, I really did enjoy this movie. Be prepared for a lot of violence, which is expected for a Mel Gibson movie, but also be entertained with a good story. I thought it made Desmond Doss a true hero in his own way, and shows that you don’t have to violate your morals, values, and faith to become a hero. I do believe this film will get Oscar buzz, and put Mel Gibson back in the category of great filmmakers. (I respect him as a film maker.) It is definitely on par with my favorite war movie, Saving Private Ryan, and you will be moved by the realities of war!!! 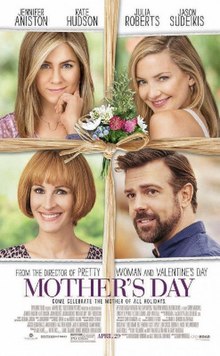 (Sidenote: Mother’s Day- Another film about a certain holiday with a great cast, but a horribly executed story, or stories in this case. The stories really had a lot of thought and emotion put it, but seeing it go from one story to another many different times really doesn’t make an impact to even feel good. It was just annoying. I guess it is the thought that counts in making a film like this, but you will end up returning a gift for Mother’s Day!!!
Rating: 2.5)