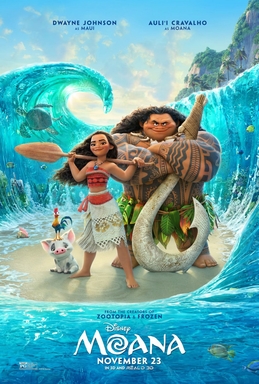 Moana may have the same Disney type of story, but the animation and culture it brings really adds depth, and I’m still singing the music!!!

I lived in the state of Hawaii for one year working as an intern at a school. What really impressed me were not the beaches, the mountains, or even the women, it was the culture of that state. I can honestly say the state of Hawaii brings the best culture, history, and legends than any other state in the US. The way of life for these people is very friendly and relaxed. They believe in their culture and try their best to pass it from one generation to the next. It is something I really appreciated when I was living there. When it comes to film though, sometimes people focus on the stereotypes like hula dancers, ukuleles, surfers, and putting pineapple on everything. They really don’t grasp their true culture, and it is disappointing. When I heard Disney was making another princess from ancient Hawaii, I really hoped it would capture their magic and pride, and make a really good story. When I saw the trailer, I realized that Disney has done their research, and that we will get something authentic at the very least. Not only was I right, but it was a Hawaiian film that I was waiting for.

What I Like: This film hit close to home for me. It was very nostalgic, and I do believe it really captures the culture, pride, history, and magic that ancient Hawaii had to offer. From the names and forms of the characters, to the legendary stories they bring, and the music. It captured it all, and it did warm my heart. You have the protagonist in Moana, voiced by Auli’i Cravalho, who really had an authentic Hawaiian accent. I liked her determination and accepting her role to become a leader for her tribe. She was chosen to help her land by bringing back the heart of Te Fiti to restore the land. She is joined by Maui, voiced by Dwayne “The Rock” Johnson, a demigod warrior who made the mistake of taking the heart, and lost it along with his hook weapon that can make him shape shift into any animal. Maui did provide some comic relief and had some great chemistry with Moana. He also had the Hawaiian howl down pack. I also enjoyed his tattoo that comes to life and becomes his voice of reason. It creates some more hilarious exchanges. The comedy in this film was pretty funny, especially the little chicken, Heihei voiced by Alan Tudyk, who really provided comic relief as a dumb chicken. The animation was awesome. Most of the film was sailing around the ocean, and the water was lifelike, and it made me miss the beautiful beaches in Hawaii. Some of the fight scenes were fun. Probably my favorite scene is when Moana and Maui were battling against the Kakamora, a fleet of coconut pirates (yeah you read that right), who wanted the heart of Te Fiti. The battle was fun to watch with its animation, and also hilarious seeing the coconut pirates fight. They almost remind me of the Minions in Despicable Me. Lastly, what really made this movie was the music. Lin-Manuel Miranda created the songs and they were a breath of fresh air. He captured the essence of the Hawaiian spirit, and made it catchy as well. Let’s face it, the song from the movie Frozen, “Let It Go,” is getting too old, and now I believe we’ll have some new songs for kids to sing until we’re sick of it. I can honestly say, this film had some of the best songs since The Lion King. After I watched the film, I was still humming the tunes, and that proves to me, how great and original it was. Ironically, I loved how in this film they joked about breaking into song too much. Shows how real Disney movies can get.

The So S0: I really don’t have anything in the middle for this film, it is a matter of what I like and dislike.

What I Didn’t Like: Unfortunately, the story for this film had one major flaw that won’t let it become great. The flaw is that it follows the same Disney formula in almost all their films. In other words, it has its share of clichés. They start off with the main character as the chosen one and have to carry out a mission, they also may have an overprotective parent, someone whom they love passes away, the person who passed away comes back in spirit to remind and motivated what they are chosen for, the conflict leads to a split of two characters which eventually in the final battle they make an epic comeback that helps complete the mission or battle. The only difference which I do give them a little credit for is that the princess didn’t have a love interest. It’s unfortunate, but I couldn’t help myself notice the predictability the Disney formula brings.

Overall: It is a typical Disney movie, but it brings something fresh and new to the table. The Hawaiian culture is well represented here, and I’m sure it will make my friends over there really proud in what they have done. I hope the rest of the US can learn about the true Hawaii, and maybe apply their way of life into their own life. Until then, this is something special that I can cherish, and keep their music chiming in my head!!!