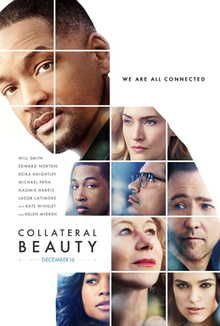 Collateral Beauty started off with a lot of intrigue and charm, but as the film progresses the charm turns to a very underwhelming end!!!

Not much to say about this film, but one big reason I see it in theaters is because of Will Smith. Though the rest of the cast does help, but I’m a huge Will Smith fan and will see anything with him in it.

What I Like: I liked the premise of the story and the charm it brings. I knew going in it was going to be an emotional drama. So at the beginning where the emotions comes in three different stages which are time, death, and love. I really liked the writing in describing how important all this three stages are no matter what state of emotion you’re in. In this case you have Howard Inlet, played by Will Smith, who is suffering a deep depression after his daughter’s death to cancer. He pretty much shut everybody out in his life, and his successful company he founded is on the brink of collapse because of it. Probably my favorite interaction with these stages was time. I like how they explain the different philosophies of how we perceive time and debate which philosophy is right or a bunch of crap. I thought it was interesting, and made me think about the value of time in my life. It’s funny that time to me is more important than love or death shows where my mind is at. With that said, I thought the writing at the beginning of this film put a lot of thought into the philosophy of emotions which is very interesting.

The So So: When I saw the trailer for this film it made it seem that the conversations that Howard is having with Time, played by Jacob Latimore, Death, played by Helen Mirren, and Love, played by Keira Knightley, were all part of his conscience of his grieving phase. It turns out that they were hired actors that his company partners hired to try to get him back together to right the ship of his company from collapsing. The fact that they were hired actors really lost any sense of depth that this story can bring. It was still interesting to watch, but now with a different mindset for me. In other words, instead of looking at it philosophically, I looked at it as a mission or job that needs to be completed.

What I Didn’t Like: The payoff for this story really fell off a cliff Wile E. Coyote style. Not only did the hired actors try to help Howard, they ended up helping the business partners with their own problems. Then in the end of the movie, it made it seem like they were a figment of their imagination where it helped make Howard make an important decision to save the company and its employees. What really confuses me is that they paid these actors a lot of money, some in cash, so where did that money go? After that, I’m still flustered with the fact that whether the three actors were make believe or real. On the other place of the story, Howard meets up with a therapist leading out a support group for people who lost their children. Howard finally decides to join, and talks to the therapist, Madeleine played by Naomie Harris. It made it seem that they meet each other for the first time, but there is that twist in the end where she is his actual wife and Howard finally decides to go back with her after all his tribulations of grief. Honestly, it just made that whole dynamic seem more awkward than inspirational. It really didn’t make sense to me of how they were married, then become complete strangers, and then they reconcile. Made the whole payoff completely underwhelming, and that is very unfortunate.

Overall: I loved how this film began, but almost hated how this film ended. It got rid of all the charm it built up, and turned that charm into deception for me. It’s like the writers took their time to write a good premise and first half of the story, but wrote the second half of the story in a day, consulted by a teenage girl who loves Twilight. It’s unfortunate, and quite honestly, wasted the roles of this very talented cast!!!

(Sidenote: Nina- This film had so many controversies that I had to see it for myself. The biggest controversy is the casting for singer Nina Simone. They had the beautiful Zoe Saldana play her, and they completely transformed her to the role physically that I can understand why it offended people. With that said, I thought Saldana really played the role well. Her singing in some of her famous songs were really entertaining to watch. As for the rest of the film, I thought they focused too much on her tail end of her life which was really negative, and didn’t really give the character of Nina Simone any justice to why she is so famous. She was a strong activist during the Civil Rights Movement, but instead showed her drunk, angry, eccentric side. It is quite disappointing, and can understand why Nina’s estate refused to endorse the film!!!
Rating: 2.5 Stars)