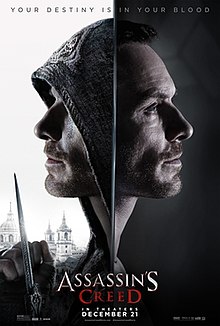 Assassin’s Creed may have some cool and fun fighting scenes, but the story was so confusing I really didn’t understand what the heck just happened!!!

I don’t why movies based on a video game are so horrible. i can’t name you even one that is good enough to be respectable. A lot of my favorite video games has turned to terrible movies. Some travesties include Street Fighter, Mortal Kombat: Annihilation, Resident Evil, Hitman: Agent 47, and that’s just the tip of the iceberg. You would think somebody will get it right with our favorite games, but it hasn’t really happened yet. The latest video game victim is Assassin’s Creed. For this certain video game, I’m not too big of a fan. I only played the first game, and I thought it was too repetitive. So when the film came out, I wasn’t too excited. With that said, it has a good cast with Michael Fassbender, the beautiful Marion Cotillard, and Jeremy Irons whch did give me a glimmer of hope. Not really.

What I Like: The only reason this film is watchable is because of the action and fighting scenes. They were fun to watch seeing these assassins parkouring from building to building in ancient Spain, and assassinating people with their sliding knives. It really did have a good blend of CGI with their action scenes, and some good editing between back in time and what is happening right now. I thought Michael Fassbender did his best as the main character, Callum Lynch, a criminal who gets abducted by the Templar Order, and force him to use the memories of his ancestors to fight back in history as an assassin. He was fun to watch, and seeing these assassins just stage diving off of buildings.

The So So: I was actually surprised that Marion Cotillard actually took this role. She is an Oscar winner, why the heck would she be in a video game movie. (I can say the same for Fassbender, but he’s actually a fan of the game.) She did the best she could do in this role as Sophia Rikken, even though half the time she just looking at Callum flying around the roof. Jeremy Irons as Alan Rikkin had a better part as the villain. He was a villain with great purpose, but pride and vanity doesn’t make him an intimidating villain whatsoever.

What I Didn’t Like: I only played the first video game, so I kind of understand the main premise for this film. After saying that, the story was very freaking confusing. All I know is they are using the assassins to find a very valuable artifact called Apple of Eden which holds the power of free will. (What?) The last part of the film is the most confusing. Like I still don’t understand the purpose of Callum’s mom being killed by his father. It also sets up that cliched The Lion King moment where he meets with his dead mom and inspires him? What were the other assassins doing in the Templar Order facility doing nothing, and why rebel now? When the Templar Order found the Apple of Eden, were they that naive thinking that leaving the assassins behind will be the end of it? How did the assassins find them? So many questions and loopholes made my head spin in a bad way. Some fans of the video have already told me that if you played the video games you can understand the story. I’m sorry, but to make a movie and become successful, it has to appease to the whole audience, not just for fans of the games. If that is true, that is very lazy writing.

Overall: I do believe fans of the game will like this. As for me, I enjoyed the fights and action, but really not much else. Depending on how much money it makes, there may be sequels, but for these films to be good, they need to get better writers!!!