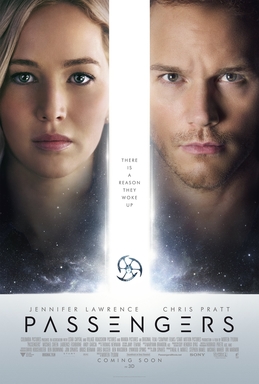 Passengers started off as a very intriguing sci-fi movie, but the ending made this sci-fi movie not as smart as it should be!!!

Chris Pratt is definitely a guy that has made it to the big time. He became a nobody to a somebody real quick with his comedic charm. The first I saw him in action was in the film Moneyball where he played a baseball player who was given a second chance. He was good, but he decided to get in the best shape of his life and star in Guardians of the Galaxy where his name really blew up. He was awesome, and really showed his true potential as an actor.  Ever since then he has been in many of the big budget movies like Jurassic World, The Lego Movie, and The Magnificent Seven. He did all this by really being himself. I’m enjoying him now, and look forward to his future films. With his next film, a sci-fi movie called Passengers, starring with the beautiful Jennifer Lawrence, why don’t you want to watch this film? Sometimes you can’t make gold all the time.

What I Like: Let’s start with the chemistry between Chris Pratt and Jennifer Lawrence. They were great together. They did start awkward at first, which they were supposed to, but really flourished until the end. I liked the way director, Morten Tyldum, really created a cool set with the spaceship and all the technological features. It was like Tony Stark going to space with his own spaceship. It was visually dazzling and cool, and made it fun to watch. I also enjoyed the character of Arthur, played by Martin Sheen, a bartending robot who brought a lot of charm and good talks with the characters. The story of this film was very simple, two people are going to a new planet but are awaken early from their hibernation, and learn to live with each other and accepting their fates. It dealt with three different themes. The first theme was being awake but all alone with no one to relate with. That is what Chris Pratt’s character, Jim Preston, had to deal with after being accidentally woken up from his hibernation. It deals with Stockholm Syndrome of going crazy being all by yourself, and realizing you will die before you get out of the spaceship to a new world. He spends a whole year being by himself, with the only person he can talk to was Arthur. It got to a point where he was contemplating suicide because he had no purpose until he realizes he can wake another person up. Now he deals with a big decision of waking a women up to give him company but suffer the same fate. It just shows that nobody is made to be alone, and you might have to the unethical thing to save your sanity. The second theme deals with once Jennifer Lawrence’s character, Aurora Lane, wakes up, and realizes they are only ones in the spaceship and never will make it to the new world alive. They learn how to work with each other, and eventually develop a relationship. The biggest part of this theme was when Aurora finds out that Jim woke her up on purpose, how angry and resentful she gets towards him, and what to do when she has no one else to talk to because she hates the only other person. These two themes really made the movie very intriguing and interesting to watch in how the story develops.

The So So: There really is good things and bad things with this film. Nothing really in between.

What I Didn’t Like: The third theme of this film’s story really brought it down. It was a big victim of plot convenience. When one of the spaceship’s crew members, Chief Gus Mancuso played by Laurence Fishburne, all of a sudden wakes up from his hibernation and sees all the troubles the spaceship is going through, and has Aurora and Jim help to fix it and save the rest of the 5,000 people still in hibernation. Since Gus is a crew member, he has all access to the spaceship and can override the spaceship’s procedures. That is until he dies from natural causes, and it’s up to Jim and Aurora to find the problem and fix it. They do find the problem, but they have to manually fix it which means Jim has to go to the engine’s ventilation door and manually opening it and risking death. (Which is cliched.) So it leads to my biggest gripe with this movie, Jim did everything to save the ship, but gets knocked into outer space with his spacesuit malfunctioning and freezing to death. Aurora manages to grab him and bring him back to the ship. He is already pronounced dead, but the health machine finds a way to bring him back to life. All I can say is if the spaceship has all this technology, including bringing a person back from the dead, they really don’t have a way to put people back into hibernation? Also, they couldn’t do the same to Gus, who was dying? Then at the end, where Jim finds a way to put Aurora back in hibernation, she decides to stay with him until death, and set a message for the rest of the people when they wake up. At that point had my eyes rolling, and really made the story just horrendous. It’s a shame really, because it really started off really, really good, but went into mediocrity if not worse.

Overall: As I said before, it started off as a really good sci-fi film, but in the end, it wasn’t as smart for a sci-fi movie. It actually turned very dumb. It is also a waste of two very good actors, and I hope they can pair up again in the near future. Until then, they have to live in sci-fi mediocrity!!!