The Founder is an interesting rags to riches story, but the main character was too unlikable to even enjoy the success story!!!

When I first heard about The Founder, I shook my head in disbelief and told myself, “They did not just make a movie about McDonalds.” Of course, it was more than that, it was about how a simple fast food chain became the biggest restaurant chain. I was intrigued to see how this all came about, and what trials and tribulations they had to endure. I got that and then some, however, not the way I was expecting to be.

What I Like: I liked the story. You have two guys making a restaurant named McDonalds which introduced the idea of getting food quicker than usual. Until a guy named Ray Croc, played by Michael Keaton, came and offered his services to franchise the restaurant. From there it’s history, and it is a cool rags to riches story about dreaming big, determination, and success. You get Keaton acting at his finest for sure.

The So So: At some points in the film, it can be very slow. Sometimes hearing all that business, legal, and financial stuff can get a little exhausting. It’s cool to see all the trials and tribulations and creating new ideas which makes the success story progressive enough, but it can get a bit too much.

What I Didn’t Like: With all the success it tells, it also tells how corrupting greed can be. Ray Croc may be determined and diligent, but he was also a greedy scumbag. At the beginning, you are intrigued, but as the movie progresses, you start disliking him more and more. For me, it got to a point of hating him. In the end, Croc is unethical and screws over the McDonald brothers, played by Nick Offerman and John Carroll Lynch, and practically steals their business. Yes, the McDonald brothers were very conservative with their business and not willing to take big risks, but Croc just went ahead and did whatever he wanted. Only difference is he actually made it happen. What really nailed my hatred for him, is when he gave his word to the McDonald brothers by giving them one percent of the shares by a handshake deal, and ended up breaking his word. It just shows that when it comes to major corporations, all they care about is the money, not the people. Heck, the guy even took one of his franchisees’ wife.

Overall: It is an interesting movie, but you end up hating the main character for his unethical works to get to where he wants to be. I never liked McDonalds to begin with (it makes me sleepy), but after watching this, I would never want to go to McDonalds ever again. Seeing this character become successful out of greed can be like the food from McDonalds, it is bad for your health!!! 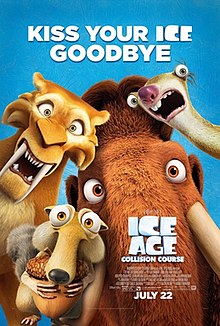 (Sidenote: Ice Age: Collision Course- This franchise had a great first movie, a decent sequel, and just goes downhill from there. For their fifth installment, it was not funny whatsoever, even by kids’ standards. The story was predictable, and the characters are just getting old. Although, I still enjoy seeing Scrat chasing his acorn. At least there are some moments for chuckles, but this franchise needs to stop!!!
Rating: 2.5 Stars)