The Shack may be a very thoughtful story, but as the journey continued the message kept taking me out of the story, and that’s unfortunate!!!

-An interesting premise for the story
-Strong acting by Octavia Spencer

-There were parts of the story that were very intriguing with good visual effects, but there were times where the lesson was just too preachy and takes you out of the story
-Sam Worthington’s acting was either good, or he forced it too much with emotion

-The payoff for the story was underwhelming
-There was a lot of plot holes, for example, what happened to Mack when he was a kid after his father beat him
Overall:

I do believe there was a lot of great thought in the writing for this story, but the dialogue was too preachy which was distracting. The visuals were nice and the acting was good enough, but it needed more substance for the payoff to work. It’s unfortunate, because it could’ve been a great inspiring and relatable story!!! 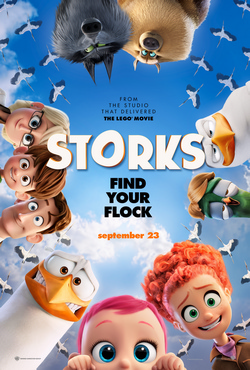 (Sidenote: Storks- This animated film may be a typical children’s story and full of unfunny gags, but it did pack a surprising emotional punch. It punched me unexpectedly, and really made it somewhat enjoyable for me. Some of the comedy had me chuckling, so the ride to the payoff wasn’t so bad for me to bear!!!
Rating: 3.5 Stars)