Beauty and the Beast (Sidenote: Gold and Morgan)

Beauty and the Beast is nostalgic for the fans of the original film, they tried new things where some worked, and some did not, but for the new fans, this is something unique and special!!!

-It was nostalgic for me who was a fan of the original with its music, story, and action
-For the new fans, this will be something special for them to enjoy
-Acting and singing was superb
-The CGI action and detail was awesome

-They added some unique part for this story where some of it works, like what happened to Belle’s mother, and some didn’t work like Beast putting Maurice in prison for stealing a rose

-It is the same story, just with minor twists that didn’t really make it that unique

Overall: For the fans this will be a rekindling of your childhood of a classic Disney movie going from animation to live filming. For the new fans, they will enjoy this special movie for the first time, and feel what we felt back then. Yes it is the same old story, and they tried to do some minor things to make it unique, but it is still the same story. At least, it still captures the essence of what makes this special for all of us to enjoy no matter how old the story gets!!! 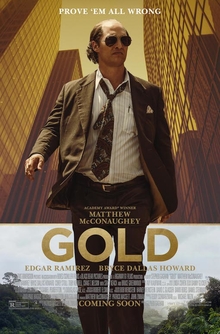 (Sidenote: Gold- This was an interesting rag to riches story about a struggling prospector searching for gold and actually struck gold. Unfortunately, the Wall Street business talk and jargon really made me bored and lose interest sometimes. At least Matthew McConaughey gets you back into the action until the end!!!
Rating 3.5 Stars)

(Sidenote: Morgan- This sci-fi movie started off interesting with some good acting, but once the story unraveled it became a huge mess. There was lot of senseless action, and really no point for the character of Morgan to do what she did. The twist at the end, really dragged the story down!!!
Rating: 2.5 Stars)