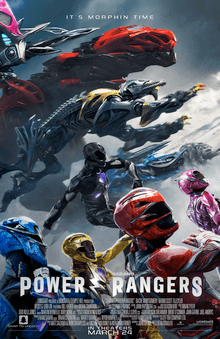 Power Rangers may give you your nostalgic fix, but it actually had some good character development, and yes the action can be typically subpar, but I’m still intrigued with what they will bring next!!!

-The character development and origin of each of the Power Rangers had a lot of depth
-Very nostalgic from the original TV series with the characters, campiness (though not as bad as the TV show), and their catch phrases
-The after credits scene really has me looking forward to what’s next
-The cameos of the original Power Rangers was a nice touch

-Alpha 5 looked very weird, but really held his own as more of progressive character than before
-The villain, Rita Repulsa, held her own, but she was was too weird and campy at times

-The action, especially in the third act was underwhelming, though better than the TV series, definitely not up to par with the likes of Transformers or Marvel Cinematic Universe action scenes
-Goldar is one of my favorite villains from the original show, and hated how he looked in this incarnation
-No Bulk and Skull, not even Ernie

Watching this film really gave me some good memories of when I used to watch the old TV show. They did a good job of keeping some original stuff, but still spun it as their own. The character development for each Power Ranger was superb and added a lot of depth for us to relate to. Though the action was subpar and cliche at the end, I still kind of enjoyed it. I am intrigued to see what will happen in the sequels!!!