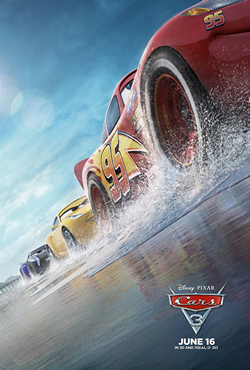 Cars 3 started off really good, but once it hits its emotional climax, it got very, very predictable!!!

-The graphics were top of the line, and shows a very realistic visual effect that gets you excited for the future of Pixar’s films in the visual department
-The voice acting was very good
-Brought the story back to Lightning McQueen, voiced by Owen Wilson, and found a good angle to tell his story for this sequel
-A part of this story packs an emotional punch

-You can only go so much with a story about car racing, however, Pixar did the best they could with this one, and it shows in a good way

-Right after it hit its emotional climax, I pretty much predicted what will happen, and almost to the T in how the story went down which made a really weak third act
-Not only was it predictable, but it had all the sport movie cliches

I really liked how this movie started, and showed that it had good potential, I give it credit for trying to make a good story out of something that has been used too much. As I said before, after their emotional moment, it turned very, very predictable. Instead of a Pixar formula, it followed a Disney formula which is not a good thing. Pixar does very well in making great original stories, however, when it comes to sequels, not so great. I just hope Pixar just stick to making original stories, and that’s that!!!

(Sidenote: Underworld: Blood Wars- After a good first movie, and then mediocrity the rest of the way, this latest film is the worst one yet. The story was typical and underwhelming. As for the action, which is their best feature in this franchise, was completely subpar and less bloody. I believe it is safe to say that it’s time to put an end to this franchise even though it ends with another sequel opportunity. I hope it doesn’t!!!
Rating: 2.5 Stars)