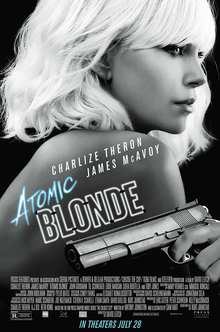 Atomic Blonde is a cool spy action film, even though the story is a little uneven, Charlize Theron makes it a fun ride!!!

-Charlize Theron playing MI6 spy, Lorraine Broughton, was awesome, seeing her fight and kick butt was just as fun to watch like Jason Bourne
-The action was cool, had a neo-noir kind of fell to it, but that one shot fighting sequence at the near end of the movie was top notch action at its finest
-The 80’s music soundtrack made it nostalgic and fun while watching
-The style of director David Leitch was tastefully creative, which is not bad for a former stunt double

-The story had a James Bond spy kind of the story, but the twists and turns of dealing with double agents and what not really didn’t give me a sens of surprise, but more of a ok, so what type of feel, that type of unevenness didn’t make as thrilling as it should be, with all that said, still fun to see all the grounded action each scene leads up to

-For a spy film, it did have all its cliches that you find in James Bond film and Jason Bourne film, which is probably why I didn’t feel as thrilled because I knew what will happen
-The intro of the movie didn’t help much either in giving the element of surprise, and why James McAvoy character as the villain, David Percival, a run of the mill type of villain

I didn’t think I was going to enjoy it as much as I did. I love the grounded gritty action that it shows, and I give it all the credit to the acting of Charlize Theron and the direction of David Leitch. Spy action junkies will enjoy it for sure, and it is something good to watch when you’re bored and have nothing else to do!!!