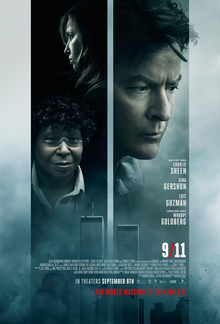 9/11, I really wanted to like this film, however, it is a typical disaster movie type of ordeal, that really was different than what I expected!!!

-The movie really takes place in a elevator where five people are stuck in during the 9/11 attacks, it really wasn’t anything I expecting (I was expecting more of a thriller type), it was more of that we’re stuck here, let’s talk and try to make it through type of ordeal, yes it makes for good character development, but I was expecting more thrills and less dialogue

-Unfortunately, it is a typical old disaster flick which even for a 9/11 tragedy, it can be eye rolling cliched
-They try to bring comic relief, but it was terrible

-The fact that most of the people survived really put a bad taste in my mouth, because to me it was not that realistic, plus the scene where Jeffrey, played by Charlie Sheen, didn’t make it out was way too predictable

I’m all for films about 9/11, it is a tragedy I will never forget, however this movie really didn’t give it any justice of emotional power that we should get. Instead we get the typical  old run of the mill disaster type of movie where it was all filmed in a elevator. No real action, no thrills, and it wasn’t what I expected. To me this was disappointing, and I hate to say it about a 9/11 film!!!