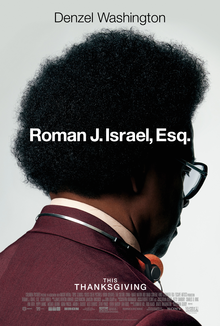 Roman J. Israel, Esq. is a well acted tragedy that teaches the thin line of what is wrong and right, it was interesting enough to be worth a watch!!!

-Denzel Washington does give a tremendous performance as the lawyer, Roman J. Israel, Esq., he puts on a quirky, sort of antisocial, but very bright lawyer dealing with the death of his mentor and law partner, and starting a new chapter in life within his career
-The story is a tragedy, mainly because, he didn’t know what to do after his old job for a very long time, he joins a bigger and better paying firm, but realizes that it undervalues his beliefs of what is right, and when things go really bad, his desperate decisions really crosses some boundaries that affects him in the long run

-It briefly shows his relations to other people, that bring out his characterization, even though it has nothing to do with the main story, which can be boring, but adds depth to who he really is

-The story can lag with all the legal mumbo jumbo that can throw off the common minded viewers, for me it makes it interesting, but I can understand why people will not like it

It is a very interesting tragedy type of story. With another great performance by Denzel Washington in a different type of character than he usually plays, you get an interesting legal story that deals with good and bad decisions you make in your life, especially when you’re desperate. I enjoyed it, and if you’re into law movies, you will enjoy as well!!!