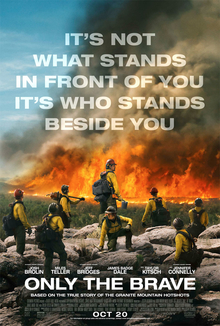 Only the Brave is a pretty good movie that honors the Granite Mountain Hot Shots very well, it may lack in thrills, but it does make up for the emotion that builds up to the end!!!

-I found this film interesting, in seeing how these hot shot forest firemen really work, and train to be right at the front lines of a huge forest fire
-I enjoyed the back stories on Eric Marsh, played by Josh Brolin, and Brendan McDonough, that added more depth to the story, and really added the emotional setting from beginning to end
-All the actors that make up the Granite Mountain Hot Shots showed a lot of chemistry with one another with the emotion and comic relief, and shows how human these heroes  really are

-It lacked any thrills or suspense throughout the film, except the end, but the emotion captured really made up for it, and gives it a good relatable interest with these characters

-Duane Steinbeck, played by Jeff Bridges, was singing in a band, and man was he horrible, I mean, what was that?

-What really made this movie from good to pretty good is the last scene where they were fighting this fire that escalated very quickly and it lead to the deaths of the Granite Mountain Hot Shots, and seeing that McDonough got lucky and survived, and seeing his emotion of the deaths really added a sense of sadness after getting to know these men very well, it made for a powerful ending
-The honor that this film gave them was pretty good, and showed why they were true heroes, and what they stood for and represented, it made their courageous deaths honorable for sure

I really thought it is a very good and honorable movie that really showed how tough and courageous it is to be a hot shot forest fire fighter. The acting was great, the story was paced well, and although doesn’t pack much thrills, it does pack  lot of emotion to make this film powerful. I strongly recommend it if you’re looking for humans as heroes!!!