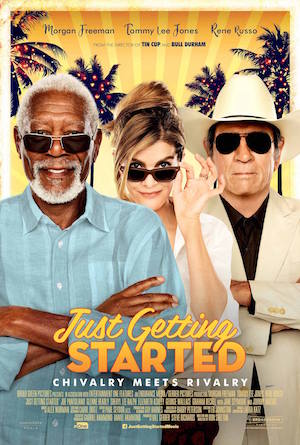 Just Getting Started is a dumb, cliched, not funny, and no point type of film only with old people trying to be funny!!!

-Some moments barely made me chuckle, and I mean barely

-I always wanted to see a film with both Morgan Freeman and Tommy Lee Jones, and it shows that they have good chemistry, however, this duo deserved better than this film that barely shows any type of entertainment

-Other than being unfunny, the story had a very weak plot, and the way it develops was very poorly written and organized
-Let alone that it was a cliched comedy that tries to put some action into it, it just had my eye rolling, especially in the end
-It seemed like both Morgan Freeman and Tommy Lee Jones just did this movie for a quick paycheck

You would think a film starring both Morgan Freeman and Tommy Lee Jones would be a film of great epic proportions, but unfortunately, it was the complete opposite. It was way too cliched, not funny, and a very weak story that really had no big point whatsoever. Overall, it was very dumb, and that’s appalling to me that I say this about a film with these two great movie stars!!!

(Sidenote: Girls Trip- This film had practically the same concept like Rough Night, only this film had a better story. The comedy was laughable, but not side splitting and sometimes a little raunchy. The drama had some moments, but nothing that would blow you away. The acting was pretty good, but nothing really spectacular. Yet, it is watchable, and that is something I can’t say for Rough Night!!!
Rating: 3 Stars)