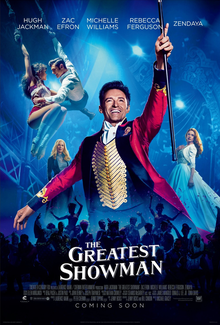 The Greatest Showman is a fun spectacle with some great music, even though the story is too simple!!!

-For a musical, which I’m not a fan of, I really enjoyed the music, with the today’s pop music, it was catchy for sure, still singing the songs right now
-The choreography was also fun to see, with all the “peculiar” people dancing around and seeing them having fun, it really does put a smile on my face
-Hugh Jackman as P. T. Barnum was fun to watch, I liked his character with a vision and a rags to riches type of story, I also enjoyed seeing Zac Efron and Zendaya doing their performances as well

-I thought the story was too simple, it’s like P. T. Barnum did this circus like it was actually that easy, even when he hit his hardships, he still stepped up way too easily, with that said, you really watch this movie for the musical performance than the story, and in that regard, it works

-As far as the story going too simple, it also felt rushed and had me with questions on how P. T. Barnum pulled this off, didn’t show much
-The whole cliched sayings that you heard before, can be very eye rolling

I’m not a fan of musicals, but I did enjoy this one. The music was spectacular and catchy. The choreography and dances really made it fun. Yes, the story was too simple and rushed, but if you love musicals, you will enjoy this. I can almost guarantee you will be singing once the movie is long over!!!