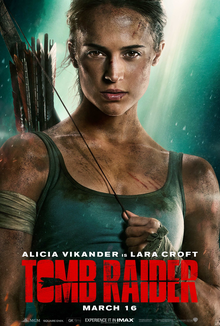 Tomb Raider does hold it’s own as a remake, but the very thin story really affects this film to make it a memorable one!!!

-The somewhat groundedness this film brings, it’s not your typical over the type adventure type of film, it has a somewhat realistic tone
-It is a fun watch, you will not get bored for sure
-The character development for Lara Croft is a lot better than the previous film, it has more substance

-Alicia Vikander playing Lara Croft is interesting, she does have what it takes to become an action hero, but I thought she lacked charisma, something that the past actress to play Croft, Angelina Jolie, had, maybe that was the point of the movie, and the sequel will show more of that, I hope

-The story is very generic, reminds you of Indiana Jones, heck, any adventure type of movie, heck in the villain, Mathias Vogel played by Walton Goggins, was really generic, it didn’t bring anything new
-What really made this story thin was the motivation for Lara Croft to find her father which is a story we have all seen before

Even with a thin script and subpar characters, it is still a fun watch. Though I’m willing to bet it will be forgettable like the other Tomb Raider films based on video games that are memorable. I would like to suggest that they should do a film on one of my favorite video games, Uncharted, I believe in the right hands, this could make a really good movie. I hope that happens!!!