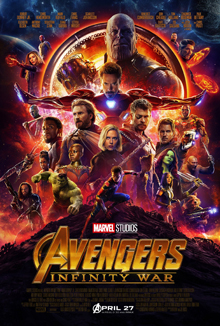 Avengers: Infinity War is everything you want it to be, great action, funny dialogue, and well put together story, the last ten minutes will have you in awe with so many feelings being crunched together!!!

-It is worth the hype, though different from the comics version, it is a well put together story where all these different characters had an important role, it pretty much worked, and it amazes me the amount of writing and effort it was put in to make this work
-The action was awesome, the different battles were all very unique, fun, and epic to watch, just the action alone really made it worth it
-As usual with a Marvel Cinematic Universe (MCU) film you get a lot of humor, but what I really loved was the different team ups that you didn’t get to see before, most notably Thor with Rocket Raccoon and Groot, Black Panther with Captain America, and Iron Man with Doctor Strange and Star-Lord, Thor and Rocket was hilarious seeing them together, some of the funniest dialogue we see in the film
-The ending had to be one of the most epic endings I have seen in a while, all I can say is that I’m still shaking my head in disbelief over what happened
-Josh Brolin as Thanos was amazing and terrifying to watch, he was definitely a brute forced, but what I really love is how they added an emotional dynamic to his character which really worked, that one scene (you all will know once you watch it) was spectacular

-I was just a little disappointed that they didn’t show how Thanos received the Power Stone, they just talked about it, but I really wanted to see it and how Nova Corp was destroyed by Thanos, with that said, the movie is already too long, and concentrated on bigger and better things

-A little nit-picky here, but there is still a lot of questions I have, yes the ending was epic, but still I want to know what just happened, and why it happened that way? (I know I’m being broad, but don’t want to spoil it) The uncertainty is really killing me

This was worth the hype. Every question of skepticism I had before this film, have been wiped away. It is your typical MCU film and then some. With great story, dialogue, and epic action, you have to go see this, not once, but at least two times. Thanos was way better than I thought he would be, and the last 10 minutes was the most jaw dropping epicness I have ever seen. I can’t wait to see what the future is installed, but I’m so ready to see what the future installs!!! 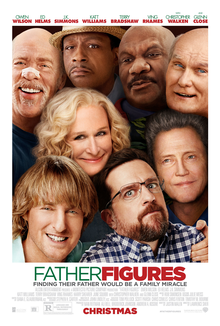 (Sidenote: Father Figures- This comedy starring Ed Helms and Owen Wilson had some comedic potential, but with a very very thin story and not much laughs, it was a bust for me. They had Terry Bradshaw, and it wasn’t funny. I give it credit for the emotion they gave at the end, but I expected a lot better!!!
Rating: 2.5 Stars)