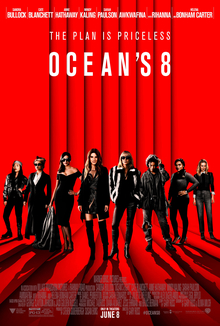 Ocean’s 8 is the typical heist film we all come to love, nothing more, nothing less!!!

-I thought the casting was perfect, everyone had their own role and the chemistry was great between all the woman planning and executing these heist
-I thought Sandra Bullock was great as the leader, and Cate Blanchett was awesome as the second in command, their acting was spot an perfect for an Ocean’s movie
-The writing, as usual, is smart, with great twists and very good with detail

-If you are a fan of the Ocean’s heist films, you will love this one, it has everything you like in a Ocean’s films with great acting, witty dialogue, strategic story, and a few twists here and there, which is also the problem, it just like the Ocean’s movies, it really didn’t anything new and or groundbreaking, just the fact that it was an all woman’s team which worked very well

-Though the execution of the heist was executed well and very thrilling, I really thought that the heist was a little too easy, the issues it presented was solved pretty quickly and really didn’t add more suspense than it should

-I really enjoyed the cameos, most notably, from the original Ocean’s trilogy like Elliot Gould as Rueben Tishkoff and Shaobo Qin as The Amazing Yen who was actually part of the heist, it showed how much respect it has for that trilogy of great movies
-Lastly, I have a good feeling Danny Ocean is not dead, just a hunch

I really did enjoy this movie with an all woman cast. It still brought back the intelligence, suspense and charm as the original Ocean’s trilogy that we all come to love. Yes, it didn’t bring nothing new, but I can still appreciate the smart writing and dialogue that it brings. They may make sequels to this one, and honestly, I’m not mad that they do as long as they continue with working in what makes these films good!!!