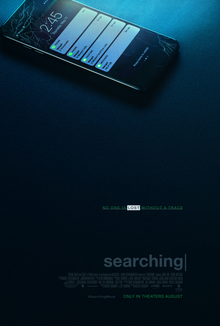 Searching is an awesome thriller that kept you engaged even though it bit off more than it could chew in the end!!!

-The story is a great thriller, and with the uniqueness of just filming in computer screens, video phones, and other things it makes it interesting of seeing what is going to happen and it all flowed well, wasn’t clunky whatsoever
-The acting by John Cho as the father searching for his missing daughter was awesome, you see the different emotions he expresses throughout the process and showing what a real parent would do in that situation
-The direction and writing of Aneesh Chaganty, who also worked for Google, is very unique and impressive hard work, we’ll probably hear more about him in the future

-It did have many plot twists that leads you into an emotional roller coaster, it goes from dark, to really dark, to somewhat dark, and so on (yes a lot of darkness in this subject matter) just like a real roller coaster, it is not for the faint of heart, with that said, there were times I thought, if it ended right there it would’ve been great, but with the way it ended (more on that later), I thought it was too much and forced which made the difference between a great movie to a good movie

-With all the showings of different social media websites, couldn’t help but think that it is intentional product placement, but in this case with more purpose to the story, regardless, it still bothered me that a whole movie relies on Internet, computers, and cell phones, it can get annoying

-It did bit off more than it could chew, and that was the ending, I would’ve been satisfied if it ended dark cuz it shows realism, but instead, it just prolonged more of the movie to give it a happy ending that the daughter lived which actually disappointed me (I know I have a heart of iron, sorry)

This is a well executed and unique story of thrills and suspense that keeps you engaged throughout. I like the lessons of being careful what you do in social media or the Internet in general which could come back to bite you. The emotional roller coaster is what makes it fun even though the ending wasn’t the way I would’ve pictured it!!!