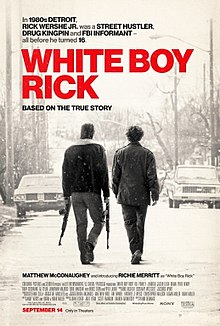 White Boy Rick works with its acting, what needed tweaking was the story to make it impactful!!!

-The acting was on point, especially Matthew McConaughey as Rick the father, and Richie Merritt playing White Boy Rick, the chemistry looked genuine and you can really see a sense of emotion between them as they are trying to get by with life, the rest of the acting was pretty good and genuine as well

-There were many scenes that I did enjoy with the drama and action, however, a lot of the filler scenes really dragged on which made it very slow, maybe it is a lack of good transitions is what is needed

-The story really needed a main point, it dealt with many different issues about a family in Detroit trying to get by in life, but with so many things going on, it gave the story an identity crises of whether it is a crime drama, a conspiracy drama, a drama in itself, or a tragedy, it seems like it try to do everything and lacked consistency, and I believe if the story had a main focal point, it would’ve made it stronger

This film had a lot of potential to be a very good one. The acting really gave it a strong first impression. With that said, the lack of a main focal point really made the difference between a decent movie to a really good movie. It is kind of disappointing because the acting was kind of wasted for a decent movie. Regardless, I still say it is a decent watch for a true story!!!