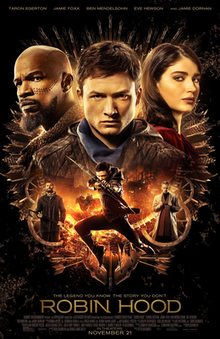 Robin Hood is better than what I expected, but not as good as it wanted to be!!!

-It does not lack in action, I actually enjoyed it, seeing all these arrows flying around and machine gun arrows (you read that right), every battle was entertaining and fun

-The acting for the most part was good, the chemistry between Taron Egerton and Jaime Foxx was good and fun, I enjoyed seeing Ben Mendelsohn playing the villain of the Sheriff of Nottingham, the one person that kind of bothered me was Eve Hewson (the daughter of Bono) playing Maid Marian didn’t seem good to me, her chemistry with Egerton looked awkward

-The story was tweaked to make it more interesting, but if you have seen one Robin Hood movie, you practically seen them all
-There were some very corny moments, like how they introduced the characters and their names which made my eyes roll

I came into this film thinking I was going to hate it, but I ended up somewhat enjoying it. Mainly because of the action and execution it brings. With that said, it is nowhere near as good as the past Robin Hood films (Including Robin Hood: Men in Tights). In the end it will be forgettable, and wasted roles for Egerton and Foxx.