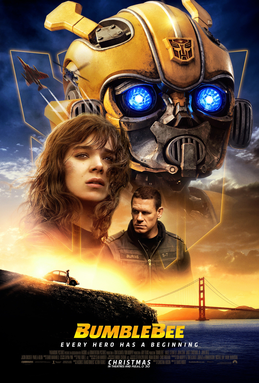 Bumblebee takes a step back in the full blown action, but adds a lot of heart to really enjoy this different installment of the Transformers franchise!!!

-One of the biggest difference between this movie and the rest of the Transformers movies is that it really has a lot of heart, charm, and emotion, reason for that is because it gave some good character development and a different tone which is a breathe of fresh air in a series that was getting exhausting
-The beautiful Hailee Steinfeld was a human character that really was developed well to actually be intrigued with the story it brings, she really acted well enough for us to care, and the same goes for Bumblebee as well
-The beginning action battle at Cybertron was awesome to see, and loved seeing the old school looking Autobots which almost resembled the 80’s cartoon

-This film took a step back from the action, one thing I did like about the Transformers franchise is the action (yes I enjoy a Michael Bay spectacle at times), with that said, it brought a different type of Transformers film with more emotion and made it different, once we did make it to the major action scenes, I wasn’t exhausted like what the last two films did
-The villains, Shatter and Dropkick, they were more vicious this time around, killing people like nothing, however, in the end, they were forgettable

-It is hard for me to take John Cena’s character seriously, in the theater, everytime he comes and says something, people were laughing at him trying to be intimidating, and for me, it was just eye rollingly bad for me
-I wish they had more Easter eggs other than Sector 7, and the Optimus Prime cameos (it is quite possible that I missed it)

This film reminded me a lot of the movie The Iron Giant. The human emotion really makes it impactful, and the way the story plays out with the action mixed with the emotion, you get a pretty good movie to enjoy. This is a breathe of fresh air from it’s previous films. I guess I wanted a little more action, but this is fine with me, and I hope they don’t overdo it again, and make it exhausting. Just take the time to make a good story!!!