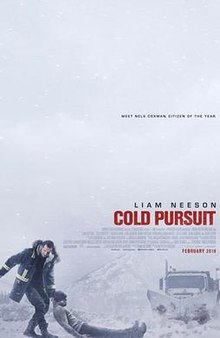 Catch my Podcast, Real Movie News and Reviews, on iTunes or at certainpov.com. Here is a link to our very first episode:

Cold Pursuit is not what your expecting with a Liam Neeson film, but yet it is still entertaining!!!

-My expectation for this film was at Taken status, but it was nowhere near that type of film, instead we get a more gritty, violent, dark type of film in a bunch of snow, yet I enjoyed it big time
-The cinematography of the snow mountains and the city of Denver was spectacular to watch
-This was also a dark comedy, and yes it had its fun moments, my favorite part is how the film announces the deaths of all its characters, you have to see it to find out why it is funny, also the long waits of an elevator, recliner, or lift is geniusly funny as well
-I give credit to director Hans Petter Moland for mixing all of the action, drama, and comedy to make it entertaining

-I did expect it to be like Taken, but more cliched in this revenge type of story, and it was but different, the black comedy was one way but the character development is better
-The main villain, The Viking, was a little too campy and obnoxious which where you can’t wait to see him die, but his death was just too nice fore him, and that made it underwhelming

-Laura Dern was barely in the movie, and I didn’t like how she just leaves with no merit to Neeson’s character or the rest of the story, might as well get a discounted actress to do the job
-It wasn’t as intense as Taken, unfortunately
-It got a little weird with the villain’s son, especially when he brings up Stockholm’s Syndrome when being kidnapped, just plain weird

I expected Taken level, but we didn’t get that. With that said, it was still an enjoyable film that had a good blend of action, drama, and comedy, with some grittiness but not as intense as Taken. It is what it is, but the film was still entertaining. Very rare you see a film filmed in Colorado which is a different type of scenery then we are used to which is a breathe of fresh air. Just sit back and relax, and enjoy the film!!!

(Sidenote: Johnny English Strikes Again- It really is similar to the first two films. It also has the usual silliness that comes with Rowan Atkinson. So if it is the usual thing, then it goes into mediocrity. If you’re a fan, then you will like this!!!
Rating: 3 Stars)