How to Train Your Dragon: The Hidden World (Sidenote: Hunter Killer)

How to Train Your Dragon; The Hidden World really didn’t add nothing new to the table in its story, however, the animation and emotion it brings is good enough and a proper ending for this trilogy!!!

-The animation was good, but when they actually go to The Hidden World, it was beautiful
-The way it ended, it does give some emotion which fans will tear up, but it does give a proper ending to this trilogy

-It flowed well for a kids animated story, but I did get the sense that the stories felt very rushed which lead to short battles that didn’t really had a sense of epicness, they fight and in a blink of an eye, it’s over, at least it didn’t drag on, but I’m kind of indecisive in this

It is the same old story like Old Yeller, though not as tragic, or Marley and me, though not as sad as it should be, point is, the story follows that cliched end when it comes to an animal you love, with that said, it is emotional, but not emotional enough that gives you a punch in the gut, in other words, very underwhelming, in the second movie it did, but not so much in this one

I know for a fact that fans of this franchise and books will love it, and more power to them. For me, this trilogy really isn’t that great as people make it out to be. The first film was decent, the second film was pretty good, and this latest one is decent to good at best. I know people will criticize me for what I just said, but it is what it is. Their good, but it isn’t great, and I joke, do they really teach you how to train a dragon? Jokes aside, the latest does give it nice closure with nice animation and decent emotion. Just the story is way too typical. Take this critique as it is, but it is not my cup of tea!!! 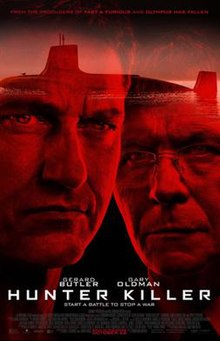 (Sidenote: Hunter Killer- This is a Crimson Tide or The Hunt for Red October wannabe. It started off really slow which made me lose my attention. When the battle started to take off, it did get more interesting. The premise is interesting, but the execution was very subpar. Also, a wasted role for Gary Oldman!!!
Real Rating: 3 Stars)