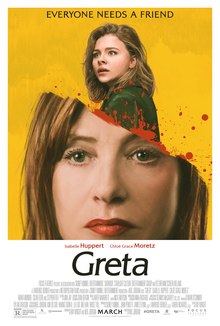 Greta tries so hard to be a psychological thriller, but not only does it dreadfully fall, it needed to be put out of its misery!!!

-Isabelle Huppert’s performance was pretty good, unfortunately the story and under developed character development didn’t do her character justice

-Chloe Grace Moretz had some good dramatic moments with her character, but there were other moments where she looks like she was phoning it in with very underwhelming emotion

-As I said before with Greta’s character, her character was so under developed where I wasn’t really sure what was her motive, they give bits and pieces of it, but never puts it all together
-The story was very predictable, and really wasn’t thrilling at all
-Everything just seems underwhelming, and some moments did not make sense whatsoever, as I’m watching it, I’m telling myself what is the main point, and a lack of one really made me not care what happens

For a psychological thriller, it wasn’t thrilling at all. The writing was so subpar, makes me wonder if professionals wrote it or was it teenagers. A wasted role for Isabelle Hubbert and a underwhelming performance by Chloe Grace Moretz where I believe she knew it wasn’t going to be a good movie. I wanted this film to end since the story really starts executing and once I saw the credits, I was out!!!

(Sidenote: Boy Erased- This was an interesting film showing a guy with a religious who is fighting with his homosexual thoughts and be put in gay conversion therapy program. I really enjoyed seeing the acting of Lucas Hedges seeing him go through his struggles, and his relationship with his mom, played by Nicole Kidman. What I didn’t like is how they made religion the intolerant culprits (though it is the South), and they are better than what this film portrays. With that said, it is still an interesting dramatic watch!!!
Real Rating: 3.5 Stars)