Catch our latest episode of Real Movie News and Reviews, click the link below!!!

Captive State is an interesting sci-fi film, but the sporadic story telling can leave you more exhausted than satisfied!!!

-I like their take on an alien species overtaking Earth, getting the government to surrender, and having the same people work for them to control the rest of the people, the story got me interested
-The acting was really genuine as well most notably John Goodman as a cop, and Ashton Sanders as a bridge between the good and bad guys

-The execution of the story is very sporadic and really makes you put the pieces together to figure out what really is going on, I personally don’t like it when they do that, cuz it does make it exhausting for me to watch, but once you do put it all together, it makes for a cool story to follow
-The aliens do look weird, but they are also vicious as well

-With everything that is happening, and with your mind trying to figure it all out, I thought the payoff, I felt they tried to go political, but it really didn’t make sense to me with that angle, but if you put in just a good guys versus bad guys ordeal, it makes more sense, though the ending still is a little unsatisfying

As I said before, it is an interesting sci-fi films. I fell that if you are a fan of sci-fi or dystopian future featuring aliens, you will enjoy this film. For me, once I was finished watching this film, I felt more exhausted than satisfied with the way it ended. With all that said, I still believe it is a decent watch. Just be prepared to put the puzzle pieces together, and I know some of you all love puzzles. As for me, I rather see it straightforward!!! 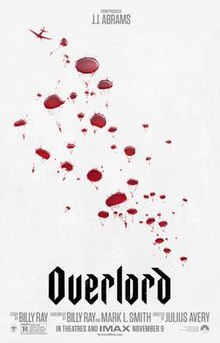 (Sidenote: Overlord- This is an interesting war/horror film. Though predictable in every sense, I was mildly entertained with the gory action. For those fans, you will have a lot of fun. For me, too much gore can be either too much or too funny. In this case, it was too much for me. A decent watch nonetheless!!!
Real Rating: 3.5 Stars)