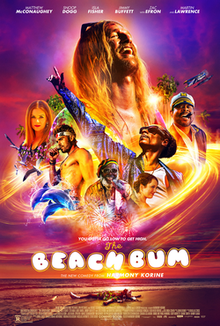 The Beach Bum is a weird movie, but I wasn’t bored at all, even if nothing really makes sense!!!

-Matthew McConaughey is the only reason why you should watch this, I do believe he is in his own crazy element, I believe he acted like his dream of life would be, and I’m not even mad at all

-It is a comedy and more often than not, it misses with it’s drinking, drug use, and other things and try to make it funny, with that said, they were a few comedic hits which actually made me laugh, mainly cuz of the randomness

-The story was simple with many different angles, however, most the angles didn’t really had any conclusion except for the main story, even with that conclusion I found it very unsatisfying and even irritating, so in the end, I was more disgusted than happy

It is a stoner type of comedy. I mean you know what you’re getting into when Snoop Dogg is part of the major cast. So you know the type of movie that you’re getting into, and you know it is going to be a weird experience. That is what you get when you watch. You may or may not enjoyed the acting of McConaughey (or McConaughey being himself, who knows). Me personally it wasn’t that funny, simple but unsatisfying story, and it did make me a little angry. So bottomline, if you are going to watch it, watch it at your own risk!!!