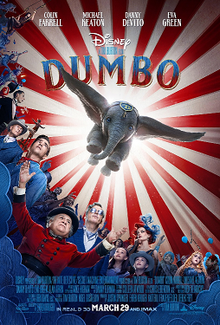 Dumbo had everything you want in a Tim Burton movie like great CGI and stunning visuals, but it lacked things you would expect from a Dumbo movie, emotion and charm!!!

-Time Burton directed this Disney classic, and it had everything you need if you are a fan of his movies, great visuals (and not on the creepy side), artful production designs (the amusement park background was awesome), and good CGI
-The CGI of the character Dumbo really did look life like, and the way they added emotion to his eyes and face was a nice feature

-The acting for the most part was pretty good, but I felt they were too one dimensional in their characters, they tried to add depth to their characters but it wasn’t deep enough for us to care

-The original film was about an hour long, so you know they had to add to the story to make it feature length, unfortunately, they went with the run of the mill story of greed and animal abuse (this film would make PETA proud), sort of like Free Willy for my 90’s people, with that said it lacked the emotion and magic the original brought, and I felt the focus on other characters than Dumbo himself is one big reason why

Dumbo is not in my top 10 in Disney movies. Yet, I know why this Disney classic is special. With all that said, this remake lacked the magic and emotion the original brought. After that said, Tim Burton did his best visually with his special effects and great production art designs that he is known to bring out. In that regard, fans of Burton will not be disappointed. After everything said, it gets an ok rating out of me!!!