Missing Link (Sidenote: Ben Is Back)

Missing Link is a good film with a lot of charm. and great stop motion animation!!!

-The film had some great stop motion animation, and I do appreciate the hard work that is put into making this film
-The voice casting is tremendous with Hugh Jackman, Zoe Saldana, and Timothy Olyphant, but I really enjoyed Zach Galifianakis as Sasquatch who talks very properly and is very likable
-The movie has a lot of charm mainly because of the voice cast which really makes it enjoyable to watch

-The story is very simple, but it is what makes it good, nothing too extraordinary and really just lets it voice cast and animation to the real talking and narration for this film

-Other than the evolution references, not much that I didn’t like from it

It is not as magical and adventurous as Kubo and the Two Strings (one of my favorite films this decade), but it is still a great watch for the whole family. The charm, voice acting, and great stop motion animation is what makes this movie enjoyable. just sit back and relax, get some popcorn or candy, and watch how special a simple story movie can be!!! 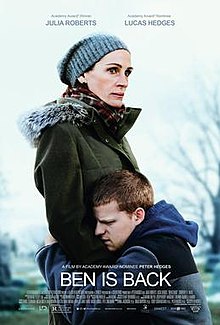 (Ben is Back- This a well acted film with Julia Roberts and Lucas Hedges. What I love about the film is because the story brings out two things: no matter how much you do right, your past can catch up with you, it’s on you how you handle it, and also the power of a mother’s love no matter how bad their son or daughter is. It is a well executed film that really shows a lot of good emotion and story telling. Won’t say more, but it is worth a watch!!!
Real Rating: 4 Stars)