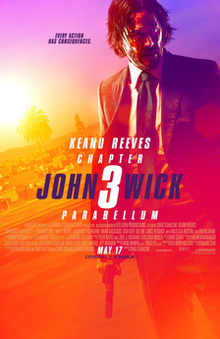 John Wick: Chapter 3 – Parabellum may have up the ante on the brutal and gritty action, but just like the past films, the story doesn’t live up to it!!!

-The real reason why you come to watch this film, the action was awesome, it really up the ante on it’s brutal and gritty action, it is a lot more violent than before
-I give a lot of credit to director Chad Stahelski, the choreography of the fight scenes were a pleasure to watch, the shoot out scenes was like I was playing some sort of video game with a humongous screen, and the visuals, lighting, and background really makes it an art form

-My opinion on Keanu Reeves will always be the same, he is the worst actor that gets really good movie roles, to get the best of him is what John Wick does, keep the dialogue to a minimum, just fight or shoot something, it is funny to me during those talking scenes, because it is funny, but bad dialogue

-The usual reason why these films doesn’t get a high rating from me, the story is way too thin, with that said, this is the best one out of the three, but that isn’t saying much
-What really annoyed me was the conclusion, it pretty much sets up for another movie, and I hate it when films do that, ugh

I pretty much have all films ranked the same. With that said, this one is slightly better than the rest of the films. Mainly because of the brutality of the shooting and fight scenes. It was almost like a Kung Fu type of ordeal when watching it. Yes the stories are thin, but if you are an action junkie, then you will love this movie hands down. The action is what makes these films fun!!!