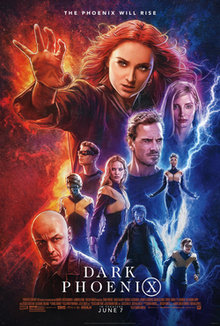 Check out our latest episode of our podcast, Real Movie News and Reviews, talking about this movie and the latest news and trailers, just click on the link below, or go on iTunes and subscribe, rate, and review the podcast show!!!

Dark Phoenix is a film where it gave me plenty of mixed feelings, there is some good, especially the action, but there is some bad like the unevenness of the tone, so take it as you want when you watch this!!!

-The one thing that definitely blew me away was the action, especially in the third act in the train which was amazing
-In the film they really show the true potential of the young X-men like Storm and Nightcrawler, and they showed their true power in the third act which is enjoyable for fans of the X-men
-I enjoyed seeing the ideology of Professor X being tested in here, something we really haven’t seen before
-Lastly, Michael Fassbender as Magneto proved once again why he is such a great cast for this role, he once again showed his true power and potential, and with his ideology, why this character is so fascinating, he is not really a villain, but not really a great person as well, I will miss Fassbender as Magneto

-As for the character of Phoenix or Jean Grey, I do have mixed feelings, first off, I liked this version better than Famke Janssen’s version, but that is not saying a lot, I thought Sophie Turner’s version was fine, but not great, her acting seem a little subpar, but the way this story was written she had to deal with what she got, regardless, the power she has was astonishing to see
-Jessica Chastain as the villain, Vuk the leader of the D’Bari, was fine acting-wise, but her character was very cliched of a species who just want to dominate the world

-It was the first time Simon Kinberg directed an X-men movie even though he was always involved as a writer and producer, but I can see where he is making rookie mistakes, like I see some bad sound editing with the voices (or maybe it’s just me), the emotion that it should bring wasn’t that impactful, especially with certain deaths, and the trials and tribulations in the revelations for Jean Grey and her turning to the Phoenix, it is rather unfortunate, though I do give him credit for that final action scene
-The timeline for all these movies are really messed up, yes they said that X-men: Days of Future Past closed that time loop, but that is just a cop out excuse if you ask me, so a lot of these things happening kind of don’t make sense in the continuity
-Lastly, the whole relationship with Beast and Mystique seemed not needed even the things that followed in regards to that

The biggest question. Is it better than X3: The Last Stand? I’m going to have to say yes, but it is not that much better. I always enjoyed this X-men franchise from the good to the bad. As this is the last one with this cast which has been enjoyable for the most part, I’m looking forward for these characters to premiere in the Marvel Cinematic Universe. We still have one more with The New Mutants, but after that, I’m looking for that breathe of fresh air. Fox did their best for the most part, and hats off to them to make these beloved characters and great story something to remember!!!