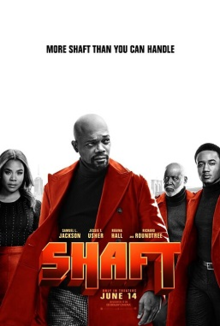 Shaft is better than what I expected, the comedy and Samuel L. Jackson really held it down even though it is a same old cliched buddy cop ordeal!!!

-Samuel L. Jackson playin Shaft is Samuel L. Jackson at his finest, the yelling and shouting of explicits made his role not only funny, but even intense at time, that is the Samuel L. Jackson I know and love
-The team up of all the Shafts including Richard Roundtree (the original Shaft) was fun to watch
-I came in expecting a comedy, and that is what I got, the jokes were hilarious that it made me literally LOL
-The soundtrack was awesome, hearing a good mix of oldies, 90’s hip-hop, and today’s music (more on that later)

-I like the action it brings that reminds me of a 90’s action movie, I wish there was more of that in the film
-Jessie Usher was fine as today’s Shaft, but the whole millennial stereotype was annoying

-It is the same old cliched buddy cop of type of film, because of that and the thin story, it is very predictable
-The way they wrote why in the 2000 Shaft Richard Roundtree was his uncle, and now his father was just really stupid, see it for yourself

This film was better than what I expected. The comedy was funny, the acting, mainly Samuel L. Jackson, was fine, and the action was fun. Would the Shaft purists like this film? My gut says probably not, but I liked it for what it is. If they do continue it, I believe they are better off with a remake with the tone of the 2000 version of Shaft would be perfect!!!