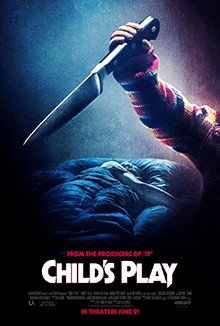 Child’s Play does keep the essence of the franchise, but the way it went down, it can be too outrageous!!!

-Even though the story is completely different where it involves the dangers of technology instead of the spiritual approach like the original, it does keep the essence of the Child’s Play franchise with its theme and tone which can be appreciated
-They really upped the ante with the violence and gore, fans of this will love it (I’m not a fan, but for this movie it works)
-Mark Hamill voicing the new Chucky doll was great, the creepiness he brings with a doll trying to do right, but once his evilness comes out it was great, his voice does remind me of his Joker voice which is nostalgic for me
-I also enjoyed the beautiful Aubrey Plaza as the mom, Karen, the comedic tone it brings was perfect for her and fits her acting persona, I was definitely interested in how she does in a horror film, and she did not disappoint

-Gabriel Bateman playing Andy was good enough, but I don’t understand why teenagers really want a Buddi Doll, don’t make sense to me in that regard, though the technology aspect was interesting

As I said before, it does capture the essence of the original franchise even though the story is completely different. Mark Hamill voicing Chucky was great, and the rest of the acting, especially Aubrey Plaza, were great. With the extra gore and violence, it will please fans of this franchise and genre. I just didn’t like the third act because it was too outrageous for my liking. Who knows if there will be a sequel, but I believe there shouldn’t be one!!!