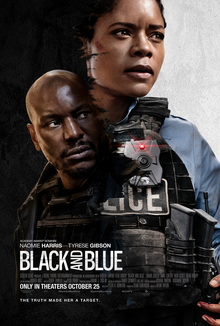 Black and Blue was interesting and thrilling at times, but the story seemed a little one sided and really didn’t put the message through powerfully!!!

-Naomie Harris playing the protagonist was a joy to see as the good cop being chased around by all the bad cops and bad people
-Michael Colter (aka Luke Cage) as a shot caller of a drug cartel was pretty menacing and intriguing to watch
-Some scenes were pretty thrilling, and kept me engaged

-Tyrese Gibson had his moments in his acting, but at times, it was hard to take him serious
-The twists, though predictable, was executed very well

-The message for this movie was a little confusing to me, was it about how there are good cops around, or that most cops are bad, I felt it was a missed opportunity to bring in something powerful, but what I felt was a one sided argument that instead of having people learn and understand, it just added fuel to a big fire already, it just wasn’t effective enough
-The last action was way to over the top for my liking, and lost its realistic touch

The movie was decent enough to get my attention and actually care on what it is going to happen. With the great acting by Naomie Harris and Michael Colter, and the thrilling scenes throughout the film, it makes it somewhat enjoyable to watch. Unfortunately, the story was not effective enough to make this film powerful, and to me, that is greatly disappointing. It is a hot topic where people can watch and learn, but won’t get that umph factor here!!!