Charlie’s Angels (Sidenote: Scary Stories to Tell in the Dark) 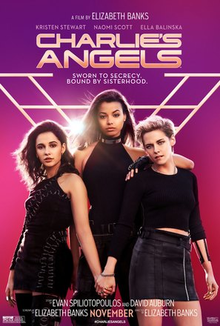 Charlie’s Angels is a fun ride action wise, but as a comedy it falls flat!!!

-I really did enjoy the action in this, the fight scenes were fun
-For Kristen Stewart, I actually enjoyed her acting, she added a lot of charisma which you don’t see in her past movies, I was actually impressed with what she brought to the table
-The rest of the cast was pretty good as well, the chemistry between one another and Bosley, mainly played by Elizabeth Banks, was pretty good
-The cameos were great as well

-I give credit to director Elizabeth Banks in crating this decent version of Charlie’s Angels, but the times they use CGI looked very off and distracting
-The story was decent, but very predictable, also, I wished this was more of a remake than a sequel from the past films, it would’ve been that much better

-The comedy was not funny, I barely even laughed to some of the jokes they bring because they were not funny, let alone that the execution for the jokes seemed rushed

I really enjoyed this movie a lot more than the first two movies. It was fresh and less campy, and flowed a lot better. The trio we got had great chemistry, and I was greatly impressed with the acting that Kristen Stewart brought. Yes, I can excuse the distracting CGI and predictable story, but the comedy was what really made me lose more points in my book. With that said, it is a decent start if they plan to make more films on the future!!!

(Sidenote: Scary Stories to Tell in the Dark- This reminds me of Goosebumps only a lot more creepier. I give it credit for rekindling a classic book that I remember as a kid. With that said, it does follow the horror movie tropes. For PG-13 horror, I guess it is pretty decent teen horror flick!!!
Real Rating: 3.5 Stars)