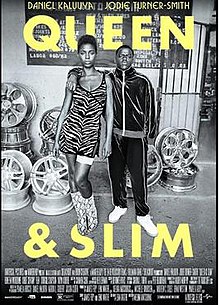 Queen and Slim is a perfect tragedy, a lot of thrills, drama, and emotion that will captivate you and make you think on the power it gives!!!

-This story is a perfect tragedy like Romeo and Juliet, you pull for these people where a controversial murder leads them to a romance story like no other
-I give credit to director Melina Matsoukas in making a film that is thrilling, emotional, and powerful, I was into every single minute of this film, it wasn’t boring at all, the dialogue was great, and bottomline, it is a story you care about no matter what side you are on
-The acting and chemistry between Danial Kaluuya and Jodie Turner-Smith was superb, the development of their characters and ideology was spot on, their relationships with other people in this film really speaks volumes to why they are the way they are, and why they grew a connection with each other, great, great acting

-The fact that people won’t give this film a shot because of their own ignorance, instead of seeing the other side of a story and be open minded they rather be perceived as uncaring and bigoted, and that’s a shame, because I believe if they give this film a shot, it can open their eyes, at least I hope it does

This is a must watch. It is powerful and emotional and it will leave you thinking and shaking your head. As I said before, it is a perfect tragedy. It is something that will make you care no matter if you think what they did is right or wrong. I will say it again, watch this movie, go watch it now!!!