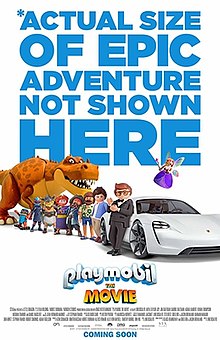 Playmobil: The Movie reminds me a lot of The LEGO Movie, only less thought provoking!!!

-The voice cast was pretty good, I enjoyed Daniel Radcliffe as secret agent Rex Dasher, but I thought who really stole the show was Jim Gaffigan as Del, the food truck hipster that helps the protagonists

-The comedy was come and go, but it did make me laugh out loud a few times
-The songs were come and go as well

-To me it just seemed like a knock off of The LEGO Movie, get a toy, and make a movie about, only just come up with a script of cliches instead of writing something thought provoking that we can all learn and be inspired, instead, it was just another children’s movie with cheap thrills

To put it simply, it wanted to become like The LEGO Movie, but instead it was just another run of the mill children’s cartoon. It may make you laugh, but nothing great whatsoever. It’s a shame that Playmobil toys were held hostage in this movie!!!