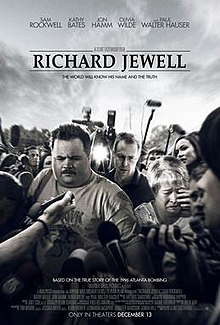 Richard Jewell is an interesting story even though it follows all the Clint Eastwood’s tropes!!!

-The acting was superb, especially Sam Rockwell as the lawyer, he was tremendous in trying to make things right, I also enjoyed seeing Paul Walter Hauser playing the titular role of Richard Jewell, his naivety and innocence really added depth to his role, other roles were really good and authentic

-The story was interesting, it does remind me a lot of Sully of a person who does a heroic thing, and yet, they are treated like a villain, it is a Clint Eastwood trope of story telling which can get redundant

-The thing about Clint Eastwood’s movies is that they are too straight forward in his story telling, there may be drama and what not, but I feel like the story can be executed more creatively

It does follow the tropes of a typical Clint Eastwood movie, and you can take it as you please. With that said, the story is interesting enough to watch, and the great acting makes it worthwhile. What I enjoyed the most is seeing the character of Richard Jewell’s attitude about law enforcement change as the story goes on. That was the best part in the end!!!