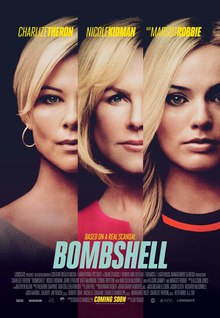 Bombshell isa sickening yet fascinating well acted film in one of the biggest scandals of recent years!!!

-What I really enjoyed about the film is the acting, especially Charlize Theron as Megyn Kelly, I really didn’t recognize Theron in her role, and that is a great thing, I also enjoyed Margot Robbie in her role as a victim as well, with all that said, seeing John Lithgow as Roger Ailes was a marvel to see in his make up and suit and acting
-The story was fascinating to see unfold, and exposes some of the terrible things they do in a “conservative” cable news channel

-What they showed was good enough to be sickened by what happened and sympathize with the victims of Roger Ailes, with that said, they do play it safe for the most part to somewhat expose enough of what happened, but didn’t really showed much which I believe would’ve made it more effective to sympathize with the victims and show how wrong and why this sort of thing needs to stop

-The subplot with Margot Robbie and Kate McKinnon’s character really was not necessary, and felt forced, especially because it didn’t really happen either
-I wish there were more thrilling scenes instead of seeing all that political crap

Seeing the harassment from Roger Ailes will make you sick to your stomach. Seeing the development and how things unfolded and what gave these women the courage to stand up for what is wrong is fascinating to see. This scandal was the start of other major harassment scandals in the future. I hope this can inspire more woman to stand up, and I believe that is the biggest purpose of this film. Only time will tell if that is a reality!!!