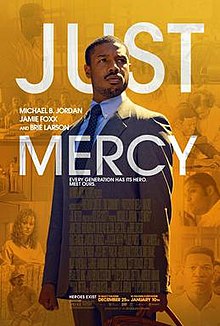 Just Mercy is a feel good, well acted film once you get use to all that lawyer jargon!!!

-The story is a feel good story where it shows that there are good people in this world that is willing to help, it is a true story which adds a noice touch to your emotions
-One reason this was a joy to see was the acting by Michael B. Jorden as the lawyer helping victims on death row, but most notably, Jamie Foxx as a death row inmate was very spectacular to watch

-For a film about law, it does pack their jargon on law and what not, but I can honestly say, with this film it was pretty easy to follow

-This movie suffered from showing too much in the trailers where I knew what will happen, yes it is a true story and know what happens with a little research, but I liked to be thrilled, the lack of thrills does affect it for me

It is a feel good movie with some great acting. It will pull at your emotional tug strings. For this film, you can sit back, relax, and just enjoy what it has to offer. You can be inspired, or be rest assured that there are still good people in this world!!!

(Sidenote: Where’d You Go, Bernadette- This film had the case of a great premise, but ended up being a crappy film. I give credit to Cate Blanchett on her acting of a person with extreme anxiety, but after a goof build up and development, it just didn’t make any sense. The lack of payoff really kind of infuriates me, because it ended up to be a waste of time. Where’d you go, Bernadette? Honestly, who cares!!!
Real Rating: 2.5 Stars)