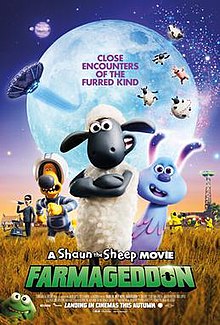 A Shaun the Sheep Movie: Farmageddon still has everything you love with this franchise, even though this story is all too familiar!!!

-It has everything you love and expect in a Shaun the Sheep franchise, the no dialogue, pure claymation action, and slapstick comedy, just add an alien to this mix

-Though I can see why people would love Shaun the Sheep, but for me it is not really my type of ordeal in my taste in film, although, at least this time around I knew what to expect, and not be surprised like what happened to me in the first film

-The story just reminds of all the other gentle alien stories from the past, especially the film E.T., so in the case for uniqueness, it is not up to par

For what the franchise brings, it will continuing bringing for your needs if you are a fan of the franchise. For the fair weathered like me, it is entertaining enough, but it is not by any means something new. The first film is definitely more original. With all that said, I can appreciate what it does bring, and the fans of it will definitely not be disappointed!!!

(Sidenote: Late Night- I may have said this before, but this is my officially last Sidenote of 2019. For the film Late Night, I really enjoyed seeing the aspect of being a writer in a late night show. I loved what Mindy Kaling brings in with her acting and wit, and Emma Thompson was pretty good as well. Though, didn’t like how the third part of the film went down, but I liked what this film brought to the table overall. It can even be inspiring!!!
Real Rating: 4 Stars)