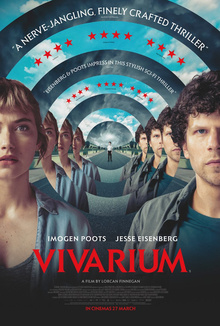 Vivarium kept me engaged with its weirdness and acting by their main characters, but the climax was very, very underwhelming!!!

-The acting chemistry between Jesse Eisenberg and Imogen Poots was great, seeing them trapped in a a suburban home, and seeing them just deteriorate into madness was interesting.

-The premise of this thriller definitely kept me engaged, with all the weirdness that is happening, I was waiting to see what is really going on with this story, with that said, it just kept going and going, and I was like just get on with the climax already

-Because I was waiting for the climax so much, the payoff really did not suffice my appetite, it was like all I was fed was a mint when I expected a feast, when it all ended, I just didn’t get it at all, and I hate it when I feel that way

A good premise and a fine acting job between their two leads was unfortunately not enough for this thriller. Yes, it might leave you on the edge of your seat, but all that rush for an underwhelming payoff. Maybe I might off missed something, but I haven’t been this confused since watching the movie Mother! I hate being this underwhelmingly disappointed,  but that is just what happened to me here. Now I have to rely on somebody to make sense out of all this!!!