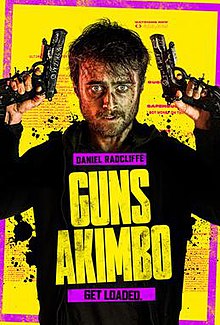 Guns Akimbo is interesting, but all it is nothing but mindless action like you were on drugs watching this!!!

-Knowing what I was getting into, I knew this was going to be a crazy story which was engaging with all the craziness, with everything that went down, and the witty nature, it did its part

-With the craziness comes the over acting and mindless action, even though I was expecting it, but it just got way too annoying once the third act started, bottomline, I just got tired of it

-Believe it or not, these type of films I have already seen before, some examples like Shoot ‘Em Up, Hardcore Henry, Smokin’ Aces, just to name a few, and they all follow the same tropes and cliches, so with this film, I kind of got bored with it

Before watching this, just remember this film is crazy and outrageous, and it is suppose to be that way. Even though I personally hated the third act, I understand that for some people that is what they need. Especially with a certain substance in them. (Don’t do drugs people.) As for me, I rather stay sober, and seeing it for what it is, it is just a film with a lot of mindless action and outrageous over the top acting. Not really for me. The only substance I want is a better story. Regardless, I understand people like this sort of mess, and more power to them!!!