True History of the Kelly Gang (Sidenote: Like a Boss)

True History of a Kelly Gang is a fascinating story, unfortunately the film didn’t do it any justice!!!

-I thought the acting was superb with the whole family, and the dysfunction they bring to the table, it did seem genuine enough
-The final shootout scene had some great thrills and cool cinematography

-This story is fascinating about this family and survival, but I couldn’t grasp all the weirdness it brings, I can understand, but don’t really know why

-For a fascinating story, the plot and execution really didn’t do it justice, the beginning part for me was flat, it picked up in the second half, but it wasn’t enough for me to be kept engaged

As I said before, fascinating story, but the execution was very subpar. It could’ve been a lot more interesting, but it was way too slow of the pacing. Maybe because of that, I didn’t understand why this family is so weird. The dysfunction gave it some development, but other than that, I just couldn’t get into it. I wish it was more like the final scene. It would’ve been a lot better!!! 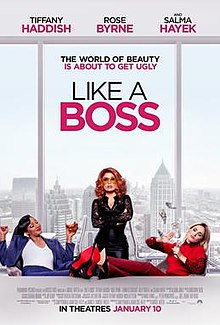 (Sidenote: Like a Boss – Once you get use to the craziness of Tiffany Haddish, and the weak innocence of Rose Byrne their comedic chemistry is all right. It did flow well, but the story was quick and rushed. In the end the all too familiar type of plot just make this film meh!!!
Real Rating: 2.5 Lipsticks)