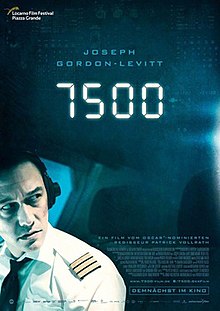 7500 is a basic thriller that is also intimate that creates a chill like never before!!!

-Joseph Gordon-Levitt (JGL), who hasn’t acted in film in a while, really gave a great performance where he showed a lot of emotion, and keeping a cool head when everywhere else is going crazy, even like talking to the terrorist to calm down the situation really speaks volumes to his character
-Everything in the film pretty much happens in the cockpit of the airplane, because of that it does create a thrill of seeing and hearing what the protagonist sees, you don’t know what is going one, and when the things you do know is going down you react, that’s why I call it an intimate thriller, being in one setting does create a unique thrill
-I also enjoyed actually seeing what really goes on in the cockpit with real pilots, it is an interesting watch to learn and understand

-The thrills really comes from a basic story of terrorism, the rationale is some thing we all know too well and why it happens, with all that said, the way the execution happens really made it gut wrenchingly thrilling, and I applaud to director Patrick Vollrath for that

-The character of one of the terrorist, Vedat, was an interesting character, but I wish I can understand more of him, and why he participated with the other terrorist, I want to learn more, and unfortunately for him, it was all too vague

Yes, it is a typical thriller involving terrorist, but this give it a unique approach to view it in the eyes of a pilot post 9/11. It was very interesting, and I did enjoy the execution of the film and made us care. For a thriller to make you on the edge of your seat, it did its job effectively!!!