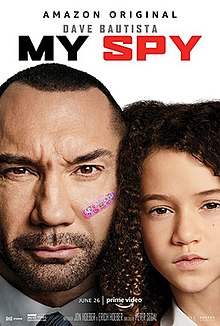 My Spy does have a sweet charm to it, but in the end, it is a hugely cliched spy movie!!!

-For a film with a big former wrestler action star and a little girl, it does have some charm to it, the relationship with Dave Bautista (Batista) and Chloe Coleman was sweet and effective during the emotional parts

-It was very, very predictable, but without spoiling it, there is one part that I did not see coming, even though it was short lived, but I was mildly surprised
-Not sure with Batista’s acting whether he was directed that way or he really can’t act with a lot of emotion, I believe the former is true, but it did appear his acting was weird and awkward, but it kind of makes sense for the film

-If you watched any spy film, you will know that this is a cliched mess, the predictability, the developments, and even the villain was all something we have seen before

Now that this film was finally shown (Almost a year later from its initial release), it is what I expected since the first trailer. It is a cliched, but a sweet and charming spy film involving children. You can add Batista to the list of action stars dealing with kids in film. Not sure why they have to go through with that, but some of them are good and some of them can be really awkward. For this film it is right around the middle. It could have been a lot better, but it isn’t bad either. I’m just glad it finally got its release date, and finally showed it!!! 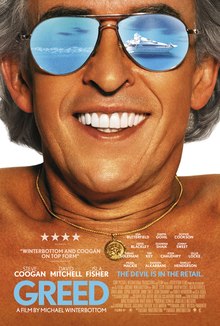 (Sidenote: Greed – This film definitely had identity issues of being a political satire (or for real), drama, or some kind of biopic documentary. Regardless, I was mildly entertained and amused. Even though Steve Coogan acted well with his character, but his character of fashion mogul, Sir Richard McCreadie, was definitely not a likable character. Him, and his family, just make you hate on greedy rich people who don’t care about anything. Maybe that is its main point, but it could’ve been more effective in it!!!
Real Rating: 3.5 Sewing Machines)