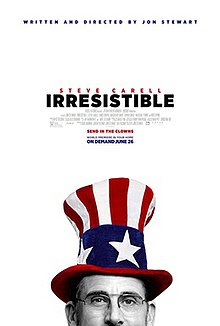 Irresistible is a very interesting film, where John Stewart directed his point effectively, despite the fact I hate political jargon crap!!!

-John Stewart directed this political satire film, and I thought he did a great job in execution, dialogue, and getting his point across, bravo to him
-The acting of Steve Carrell was great as a democratic campaign manager, and loved the dialogue between him and Rose Byrne, who played the republican campaign manager, it was fun rivalry banter between them

-Without spoiling it, the big twist at the end gave me mixed feelings and emotions, it is crazy what desperate people will do to benefit themselves, families, and communities, I hated it but was greatly astonished about how things went down in the small town of Deerlaken, Wisconsin

-I hate politics, I hate hearing all that CNN and MSNBC jargon that actually confuses me more than understand, bottomline, I just don’t care for it, and this movie is full of it, maybe for some of you all will love it, but for me, it is meh

I did like this film for what it is. I was impressed with the direction of John Stewart in making this political satire. It is entertaining enough, especially if you are fan of The Daily Show. With great acting by Steve Carell and Rose Byrne, you will be entertained by their banter. As for me political movies are exhausting for me emotionally, and really don’t care for!!!