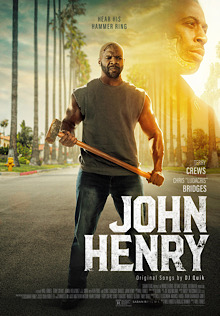 John Henry is horrible in acting, writing, and direction, ironically, I wasn’t bored!!!

-It is definitely not its intention, but I found it hilarious, even on the serious parts with how bad the execution and acting, it is up there with hilariously bad movies like The Room

-What can I say, everything is bad with this, the acting seemed phoned in, the direction seemed like the budget was very, very low, and the writing was way too predictable, I’m surprised that Terry Crews took this role, heck it is even too low for Chris “Ludacris” Bridges standards
-I was hoping for some great gory action involving sledgehammers, but I didn’t even get that, everything violent act was played off screen which is greatly disappointing
-They could’ve had a good message about immigration, but it just runs way too thin in that aspect

This was just a terrible movie, and not sure why Netflix even bothered for this film to be produced. I’m surprised Terry Crews and Ludacris took these roles. I’m surprised this story was even written outside of high school students. With all that said, I was just entertained and laughing in how bad this film is. It is up in the status of The Room of hilariously bad films. So I give it credit for not making it boring, but not for the reasons they want it to be!!!